Opinion: The West is Actually Following Nuclear Policy, Unlike Russia 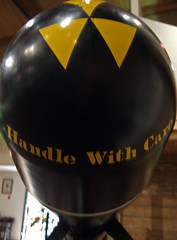 In recent years, Russia has not been properly cooperating with international efforts to limit access to nuclear weapons. IThe West, in contrast, has been putting in a much more thorough effort regarding this task. Liberal media in Russia have been working to expose the true intentions of Putin’s anti-West regime in this regard.

According to estimates from the Federation of American Scientists (FAS), based on data taken in early 2019, Russia has 4,490 stockpiled nuclear warheads and 2,000 retired warheads, for a total of 6,490 warheads. The U.S., on the other hand, has 3,800 stockpiled warheads and 2,385 retired warheads, which altogether make up 6,185 warheads, according to the FAS. Looking at this data, it is easy to see that the U.S., and the West in general, have done a much better job of halting their nuclear weapons programs and retiring warheads; whereas Russia still has many active warheads.

The UNGA delegates, specifically in the Disarmament and International Security Committee (DISEC), are currently working toward the goal of global disarmament. Finland, which allies itself with the West, claims that the West has been putting in more effort to achieve the long-term goal of complete global disarmament, in comparison to Russia. “The threat of drones carrying nuclear warheads has been a main focus on Finland’s bloc during this committee, and Finland has been working with the West to lower the number of these weapons,” said the delegate from Finland.

In comparison, Russia and its allies are on the other side of this issue. “While Russia is not in our committee, many of Russia’s allies are, and they have been focused more on keeping the right of having armed UAVs or drones, along with many other weapons,” the delegate from Finland stated.

Russia has said that that they are committed to the global effort to limit access to nuclear weapons and retire warheads, they are not doing their part to achieve this global goal.