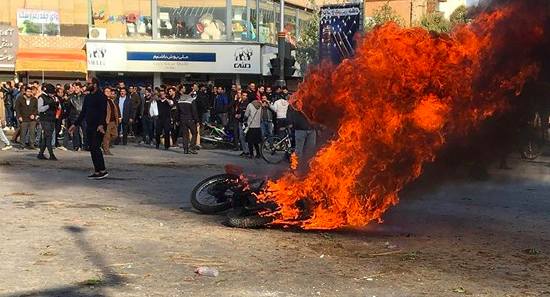 Earlier this afternoon, it was reported that on CBS that “U.S.'s special representative for Iran Brian Hook has said that more than 1,000 Iranian citizens may have been killed in recent protests.”

The protests ongoing in Iran right now are due to the increased gas prices by 50 percent. The intensity of the protests in Iran and rapidly increasing as well all know. However, what is unconfirmed is if there has been lethal force in order to control the protestors.

The Iran committee would disagree that any force is being used. In fact, at today’s press conference the Iran representative from the committee commended the Chief Commander of Law Enforcement for using “non lethal riot police” during the current protests. The representative continued by saying “We fear for the hurt people.” The representative claims that the committee “is not concerned about the expenses from damages that may be caused by the protests,” but instead are not concerned about the well being of their people. However, CBS found out otherwise.

Today, CBS reported that over 1000 Iranians were killed in the current protests happening. CBS reported that there is “Verified video footage indicates severe violence was used against protesters.” The footage included, “security forces shooting from the roof of a justice department building in one city, and from helicopters in another,” CBS quoted from Michele Bachlet (the U.N. High Commissioner).

Seems as if Iran is misinforming the public about what is truly going on in their country. Instead of owning up to their wrong doing they try to conceal it. Yet somehow, they have been exposed. What will be Iran’s next move?