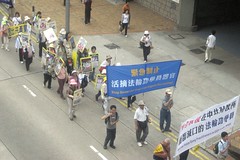 During a press conference, the People’s Republic of China (PRC) faced criticism over the reaction of forces in Hong Kong and their use of social media to spread disinformation.

"[Facebook and Twitter] accounts originating in China acted in a coordinated fashion to amplify messages and images that portrayed Hong Kong’s protesters as violent and extreme,” the two social media companies said according to the New York Times. The accounts have been taken down, but the campaign of misinformation suggested that the protesters were “sponsored by Western influences and becoming violent.”

“The People’s Republic of China has extended a helping hand as a mother nation,” the press delegate of the PRC stated. “We have offered them first aid and economic opportunities as business owners. China is a partner, we help Hong Kong in more ways than one.”

These words though have not been supported by much action, China has worked to implement a hard response to the protesters to stifle the protests and maintain the security of their republic.

“China is committed to finding that one percent [violent protesters] and prosecuting them,” the press delegate of the PRC said in response to a question on their approach to the protests.

“Western media has only been basing their facts on Hong Kong media and not giving China’s perspective in it so their reports are biased,” the press delegate said in response to allegations of their use of disinformation.