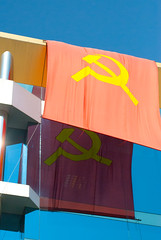 The tensions within the Soviet Union has escalated in the last few months with the economy riddled with debt and the nation completely divided politically. In the Supreme Soviet of the Russian (SFSR) these tensions have been evident, between the moderates and the hardline communists.

The hardline communists attempted a failed coup against President Gorbachev, by taking him prisoner and overthrowing his power.

“We are dealing with a rightist, reactionary, anti-constitutional coup,” Boris Yeltsin of the Soviet Union said, publicly denouncing the coup. “The leadership of Russia has developed a resolute position striving for the unity of Russia and these developments gave rise to angry reactionary coup plotters.”

The coup was met with outrage, as a screaming crowd denounced the coup and booed, claiming this ascension to power “unlawful” Boris Yeltsin said. Boris Yeltsin declared himself the “President of Russia” and hopes that the international community abides by this assertion.

“Before these demands are met, we appeal for a universal unlimited strike,” Boris Yeltsin said, speaking on the demand to release Gorbachev.

“The Russian people have been peaceful, nonviolent, non aggressive and the Soviets are trying to overthrow us. The goal of Russia has and always will be to preserve the wellbeing of its people,” a delegate of the SFSR said.