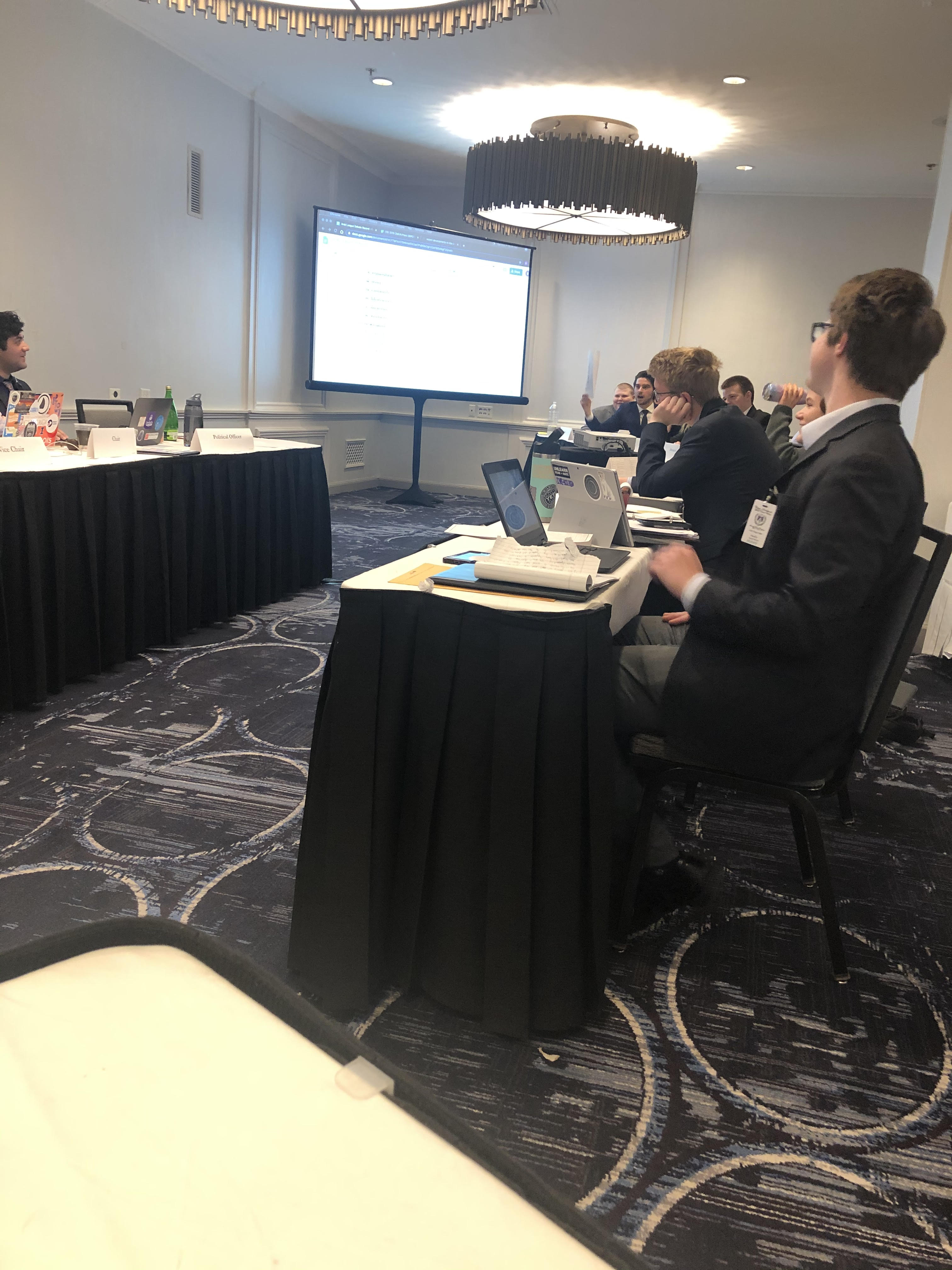 The Arab League passed resolutions to aid the Yemen Civil War and are now discussing Topic 2: Addressing the Destabilizing Aspects of Social Media and have been focusing on the media divide and security.

Concerns were raised over the use of social media to spread terrorism and “destroy governmental policies,” according to the delegate from Kuwait. Creating solutions for nation's security and defining the role of government power within social media has divided the League.

“Security or Facebook? There's a simple answer to this question,” the delegate from Algeria said. “The answer is that this Arab League must take a united stance against radical terrorism as it brews through social media. Social media is the greatest force to destabilize this League."

The debate continued with a rise in inflammatory dialogue in both speeches and notes; including bomb threats made by Morocco and Saudi Arabia against Palestine and threats by Saudi Arabia and Qatar to stop oil exports. Qatari, Egyptian and Djibouti delegations have allegedly been planning to close ports and canals as well, according to the delegates from Palestine, Tunisia and Algeria.

“It was very clear from the beginning that Saudi Arabia did not support the free exchange of information and the freedom of speech within countries. And it was also very clear that the Saudi Arabians and the Moroccans will do whatever they deem necessary to get what they want,” the delegate from Palestine said.

The blocs are diametrically opposed, one with free speech and the other censoring media.

“They're radically against these ideals [free media] and will do anything to stop the freedom of the press as they are scared that the atrocities going on in their own country will be revealed to the public through some of these resolutions that we are implementing soon,” the delegate of Tunisia said.

Disputes over how to regulate social media in the Arab League have prompted Saudi Arabia, Egypt, Qatar, Morocco, and Djibouti to take drastic measures.

According to Global Risks Insights,  “Over 100,000 ships transit through Gibraltar every year for commercial purposes, with more than 300 a day transporting heavy cargo.” Morocco hopes that its threat will prompt nations in the Arab League to support its resolution, which increases censorship on social networking platforms.

The delegation of Morocco confirmed this allegation, saying, “The home government is considering closing the Strait of Gibraltar due to the dire issue of misinformation on social media.”

Moreover, Djibouti revealed it would prevent foreign nations from accessing the Red Sea if its needs are not met. “We are open to closing the Red Sea to other countries if necessary,” confirmed the representative from Djibouti. The country’s assertions concern other members of the Arab League, as the Red Sea is a crucial trading waterway in the Middle East.

Egypt, additionally, asserted that it could close the Mediterranean Sea if its draft resolutions are not passed. When questioned about the statement, the delegate from Egypt reported, “We are certainly considering it.”

While Djibouti, Egypt and Morocco’s actions would disrupt crucial trade routes throughout the international community, Saudi Arabia and Qatar’s threats are most concerning. According to their nations’ delegates, both countries could halt oil exports to foreign nations if their resolutions are not passed. If Saudi Arabia and Qatar enact their propositions, they would disrupt the exportation of a resource critical to the economic stability of the Arab League and the entire world.

“These two nations are holding the Arab League in a chokehold,” the delegate from Palestine said.

Although these nations assert control over important waterways and resources, their threats would ultimately be in vain. Most members of the U.N., including powerful western countries, rely on these three waterways to promote their economic interests. If Djibouti, Morocco and Egypt choose to close open seas, the international community would collaborate to pass harsh sanctions and isolate the three states to reestablish control over the free waters. Also, Djibouti does not possess the resources necessary to maintain control over the entirety of the Red Sea.

Both Saudi Arabia and Qatar admitted that they are heavily reliant on the exportation of oil. Thus, the two nations would destabilize their own economies in an effort to coerce the Arab League. With this in mind, the threats made by members of the Arab World are most likely baseless.